I recently attended the 25th annual Models Of Pride conference in Los Angeles. http://www.modelsofpride.org I hadn't heard of this conference until a community member, Professor Diane Klein posted about it online and invited me to submit a proposal to lead one of the workshops. I was hesitant since I've primarily only done Q & A's after my films have screened. Queering Yoga- my documentary in the works is still in the works! I envisioned presenting and doing Q & A's when it was a polished and finished piece. Yet, I was encouraged to show work in progress clips of Queering Yoga as well as screen my prior films; Spiral Transition and Change Over Time. The Models of Pride conference is the largest LGBTQ youth conference in the U.S. with over two thousand people who attended! There was a concurrent mini professionals and parents conference that was a part of the Models of Pride event. My Dad, who is an LCSW (Licensed Clinical Social Worker) attended the conference with me and he took workshops in the professional track.

I've presented my films to college classes before and spoke about my creative processes as well as trans themes and experiences that are aligned to the content/theme of my films. I've also done many Q & A's after my films have screened at film festivals. Yet, I wasn't the only person facilitating and holding down the space of a workshop or class for an hour. During the Models of Pride workshop, I was the only facilitator presenting for an hour. Regarding preparation this brought up a lot for me. I have a history of disfluent speech which not everyone who knows me is aware of. I've struggled most of my life with speaking fluently--especially when presenting or speaking in large groups of people. Most people cannot tell that I've ever been speech disfluent. Perhaps a word or sentence here or there. Disfluency often arises for me when I'm emotional, ungrounded, or presenting in front of groups of people. I have done presentations over the years during my undergraduate and graduate school years. Some presentations have gone well, others have left me questioning my self-worth/esteem, etc. feeling bad about myself or being incredibly hard on myself when I've done my best.

I've done healing work around having a history of speech disfluency. I've also gone to speech therapy in the past when I was younger. Although, I'm fluent most of the time when I speak and most people do not know about my history, at moments my speech is disfluent. Being speech disfluent has shaped me greatly as a person. It's been a journey of being silenced and full of self-loathing when I was younger to practicing being more gentle with myself, compassionate, and self-loving. I have so much to say. I've always had so much to say and share with people and the world. Having been silenced or quiet as a child, teenager, and adult due to my speech disfluency has shaped me as much as a river shapes rocks in its path.

In my life, it's been a difficult path to reclaim my voice and even to write about this and share it publicly, which I feel called to do now. Now is the time. In sharing this, I'm reclaiming my history, voice, and story. Transmuting my hardship and what some see as a deficit into a story of empowerment and triumph. Last month I worked with a healer who said that stuttering/speech disfluency is a gift. It allows me to slow down enough to savor every word and to express what I need to say in a way that is digestible and expressed with intention. It is a gift. I also worked with her on healing and being more empowered speaking in front of large groups of people.

I have improved over the years through practice. I feel that I improve with every Q & A that I do as a filmmaker/artist. I just wish that more people would be compassionate and not judge me for being nervous or speech disfluent at moments when I publicly speak in front of large groups of people. People whom I used to call "friends" years ago gossiped about this challenge of mine. A former friend and community member told me once to my face that she heard I had a difficult time speaking in groups. I asked her how she heard that. Oh, gossip she said. That wasn't a pleasant interaction or one of compassion or really "seeing" me.

As human beings we all have a core need to be seen and heard. It's important for me to be compassionate, kind, and loving to myself. I am. It's a continual practice. There are always more layers and levels of self-love. Yet, it's important to surround one's self with friends and kind community members who are supportive rather than people who try to tear you down, due to jealously, competitiveness, insecurity, etc. I've seen speaking and facilitation opportunities go to other filmmakers/artists in my community who I know, since they are fluent speakers and it's more easeful for them to publicly speak.

I was nervous, excited, and grateful for the opportunity to present my workshop titled, Becoming A Filmmaker.
I did a meditation outside near some trees on the USC campus, to ground and center myself before my workshop began. I was scheduled to present during the third and final workshop session of the day. I arrived at the classroom, 25 minutes before my workshop began. Two volunteers showed up to assist with lights, handing out evaluation forms at the end of the workshop, etc. They were both kind yet didn't know the technical set up of the classroom. It eventually took four Models Of Pride volunteers and one USC tech person to make it possible for my laptop with an HDMI cable attached, to play my movies on the two screens in front of the classroom. The visuals of my computer were showing up on the two small TV's in the classroom, yet not on the two large screens. Due to this technical issue, my workshop began 10-15 minutes late. There were 30-40+ LGBTQ youth in attendance. I told them all that there were technical difficulties and I would start the workshop as soon as I could. After the USC student tech worker finally solved the technical issue, I offered to give him a hug. I was very grateful to be able to screen my films in the classroom!

I began the workshop by introducing myself, sharing how I identify; Queer and Trans. How long ago I came out, 9 years ago as Trans and in undergraduate college as Queer. I shared a little bit about my films and told them that I would answer questions after the first two films had screened. Then, I would screen some clips of my documentary in the works, Queering Yoga. I was clear and fluent the entire time that I spoke. I was confident and made eye contact with many youth. The youth were moved and inspired by seeing my personal documentaries; Spiral Transition and Change Over Time. I talked about my creative process and the importance of telling one's own story. I also shared about how important it is for trans people to have access to telling their stories and to be in front of and behind the camera. I talked about the Trans Tipping Point that happened several years ago and how there are more trans characters, shows, articles, and mainstream news media about trans themes and experiences than ever before. I answered questions about my films and the youth were attentive and not one of the LGBTQ/QTPOC youth left my workshop once it began. They were all very attentive and engaged with what I shared and the films I screened. I only had time left to share two clips from two Queering Yoga participants. Overall, I feel everything was covered that was meant to be shared and imparted to the youth. I handed out some of my cards to the youth at the end of the workshop. More than 10 youth spoke with me after the workshop telling me that I'm amazing and that they were inspired.

I felt so proud to be of service to the LGBTQ and QTPOC youth who attended my workshop. I'm so glad that they got a lot out of what I expressed and shared. I'm so proud of myself for articulating and expressing myself so fluently, clearly, and confidently from my lived experience; in front of a large group of people. That was a true triumph. I felt victorious, happy, and so grateful. I did it. I held down the workshop space with ease and grace, inspired the LGBTQ/QTPOC youth, and was fluent the entire time!

Below is a photo of me, my Dad at the conference, and my Dad and I at the Models Of Pride conference at USC in Los Angeles this past weekend. Oct. 29th, 2017. 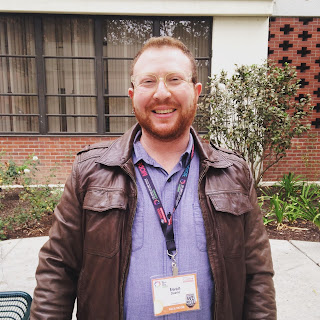 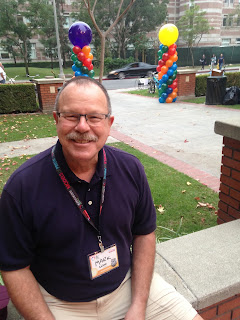 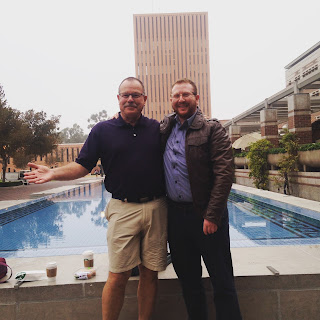